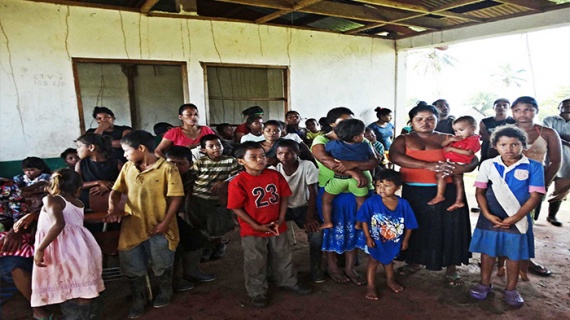 The Sandinista Government, The United Nations, China, HKND, Canada, Venezuela, U.S. Aid and Euro Solar organizations are in cahoots with pretentious emergency aid projects which have instead depleted the Miskitu Nation of their natural resources in place of helping to restore their livelihood. These projects have destroyed the ecosystem of the Miskitu Territory (which includes parts of neighboring Nicaragua and Honduras) which had remained pristine until now.

While ignoring the cries and pleas of the people’s elected leaders of the Miskitu Nation (all 10 United Tribes), the aforementioned countries and organizations continue to make deals with corrupt government officials and self serving leaders from the the Miskitu Atlantic Coast Caribbean Seas while The Most Heinous Crime of Mass Genocide is happening now in plain sight under Daniel Ortega’s Command.

Miskitu villages are under siege. Drug traffickers, invaders, “Colonos” under Daniel Ortega’s protection and orders have managed to run the Miskitu villagers out of their homes in the mountains, to the polluted Waspan & Rio Coco River, where they are dying from drinking parasite infested waters. People are dying from severe dysentery, vomiting, and starvation. Once a thriving fishing community, the people have no source of protein from the now bramble infested river. The fish no longer thrive in these contaminated waters caused by drilling, mining, and deforestation. The lethal impact of greedy contracts and corruption have left the Miskitu people without even a means to plant the simplest of grains. They are forced to literally live in the river and no one is there to help. The ecosystem has been robbed of its vivacity yielding it a wasteland and mass graveyard. Injured men are not being attended to medically by government hospital and are refused care because “They are Contras and deserve to die.” quoted from medical practitioners in the Waspan hospital. The raids on villages have left the children and adolescent traumatized more and more adolescent are turning to drug like crack (just recently introduced in the last 15 years)These atrocities were sanctioned by President Ortega,the UN ignores the cries for help from the people and is allowing corrupt leaders (hand-picked by the Sandinista government and Rosario Murillo) to represent and speak on behalf of the Miskiru, while ignoring the true leaders and over 200,000 signatures from the peoples choice representative . Eurosolar started a project them left it half done when they were done taking the natural resources they needed from the Miskitu Villages they “help”. US Congress and British Parliament, both countries who are both responsible for the chaos and deterioration of the Miskitu nation, turn a blind eye and ignore their responsibility, (while the strong arm their own citizen to be responsible) they should lead by example!

“Alba Forrestal is deforesting our land turning it into a desert. Native people are arrested if they cut trees for lumber, or cooking, and it is illegal for us to hunt or fish. We are threatened at gunpoint and forced to live in deplorable situations. The nearest hospital is roughly 150 km away, there is no medicine nearby, and if you’ve made the long voyage to the hospital, they are grossly treated, unnecessary amputation and problem aftercare and if you happen to an ex-commander no treatment not even painkillers, they discharge them with bullet and all still lounged in their bodies, the hospital is also in wretched and unsanitary condition.

“We cry out and no one is there to help…” Says a Miskitu mother.

As part of a United Nations agreement for disarmament and peace, the Sovereign Native people of Mosquitia lay down their weapons and have been deceived and left vulnerable. The U.N. promised to protect the natives and instead sent U.N. Appointed Special Rapporteur on the Situation of Human Rights and Fundamental Freedoms of Indigenous Peoples, James Anaya, to check on the situation. “Mr. Anaya never set foot in the Miskitu Coast, yet he went back to the United Nations with a report that all is well.” Our video documentation and interviews show the exact contrary of his claims. All is not well and the Miskitu Nation needs URGENT HELP!

James Anaya, Carlos Aleman and other Miskitu Leaders have betrayed their people appeasing President DanielOrtega’s plans for Miskitu extermination and land ceasing. They are selling the land and making international concessions illegally, allowing Foreign Businesses to abuse and destroy the environment and ecology. The genocide must cease! The very ancient Miskitu Nation (represented by a collective of ten ethnically diverse tribes) are actively being exterminated and their culture wiped out, whilst big foreign business and the Ortega regime are pocketing the funds.