Our homemade weapons are no match to military arms 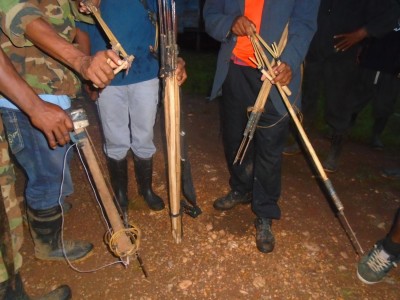 We Fight For The Proper Use Of Intelligence Of Our Species Not Egoism Brutality And Fatality. That Is Why We Gave Up Our Arms In Good Faith and For Peace!

As for defending ourselves? We were once a mighty nation of warriors, and have never been defeated in battle (our homemade weapons are no match to military arms) However, the people of Mosquitia laid down their arms as part of a United Nations agreement supposedly designed to bring about peace. The Miskitu did this in good faith and honesty, which left us vulnerable.

The U.N. promised to protect our natives and appointed Special Rapporteur James Anaya to investigate the situation of human rights and fundamental freedoms of the indigenous peoples. In our interviews last summer, the locals informed us that “Mr. Anaya never foot on the Miskitu coast, yet he went back to the United Nations with a report that all is well.” Our video footage shows clearly that all is NOT well.