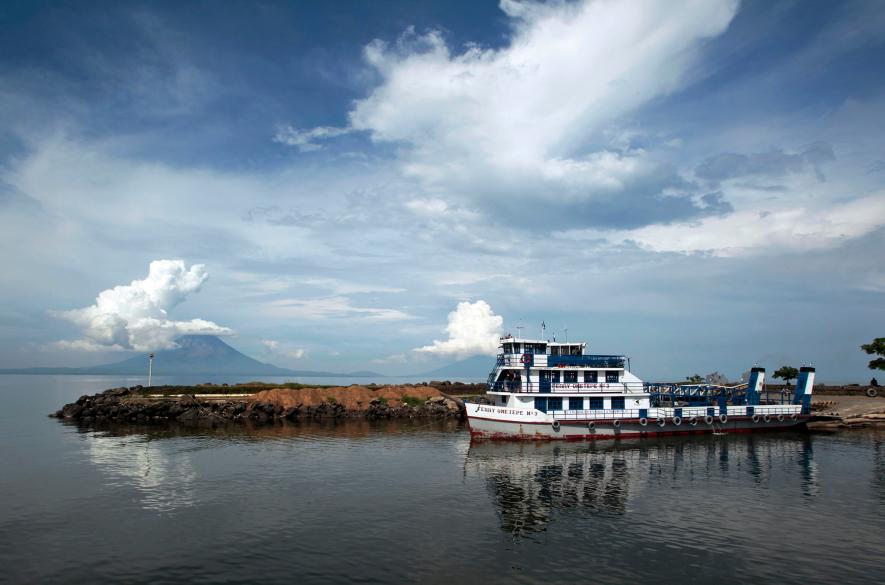 Nicaraguan officials in June granted 50-year rights to build and oversee the $40 billion canal to a Hong Kong-based firm, bypassing environmental reviews in the process. The 186-mile-long (300-kilometer-long) canal would connect the Pacific to the Caribbean, creating a rival to the Panama Canal. (See: “Panama Canal: Intro.”)

In the current edition of the journal Nature, two prominent environmental scientists warn that the project threatens “environmental disaster” for Nicaragua. At risk are “some of the most fragile, pristine and scientifically important” regions of Central America, they warn.

National Geographic spoke with comment co-author Jorge A. Huete-Pérez, director of the Centro de Biología Molecular at the Universidad Centroamericana in Managua, Nicaragua. Huete-Pérez is also the president of the Nicaraguan Academy of Sciences.

Huete-Pérez wrote the piece with Axel Meyer, a professor of zoology and evolutionary biology at the University of Konstanz, Germany.

Is it unusual that Nicaragua will not conduct its own environmental impact statement for the proposed canal, instead relying on the building company itself to do that? What limitations might that pose?

It would be prudent for any government to conduct its own feasibility studies and environmental impact assessment (EIA) on the local, national, and regional impact of constructing an interoceanic megacanal well in advance of opening up the bidding on such a project to national and international bidders, and prior to granting a concession to any firm, foreign or national. Nicaragua’s national assembly has, however, granted a concession to [Hong Kong-based company] HKND to build and operate the canal and its many subprojects, without a bidding process and without any current EIA studies.

It is unusual that any government that has the best interests of the nation and its citizens as its top priorities would not unilaterally undertake the necessary groundwork for such a massive project to ensure that the results of such studies would be thorough and transparent on all levels.

Your paper mentions the canal could destroy 400,000 hectares of rain forest and wetlands. What specifically would be lost, and what is the value of that?

Although the concession has already been granted to HKND, and the Nicaraguan Constitution and Law 800 have been amended to accommodate this agreement, the final route and dimensions of HKND’s interoceanic canal have yet to be determined. Government sources have revealed several possible routes, one of which appears to be the most likely [from Bluefields Lagoon on the east coast to the town of Brito on the west coast].

Based on this route, scientists and environmentalists have estimated the amount of hectares that will be incorporated into HKND’s canal zone and its subprojects. These hectares extend through forests, reserves, wetlands, and land designated as autonomous and belonging to the traditional indigenous populations of Nicaragua’s Caribbean coast.

The effects of construction, major roadways, a coast-to-coast railway system and oil pipeline, neighboring industrial free-trade zones, and two international airports will transform wetlands into dry zones, remove hardwood forests, and destroy the habitats of animals including those of the coastal, air, land, and freshwater zones.

If the canal is built, how serious a threat could it pose to the nearby Bosawas Biosphere Reserve and Indio Maíz Biological Reserve, as well as the Cerro Silva Nature Reserve that it would cut through?

Whether the canal is completed in the anticipated 10-year time frame or not, the construction and industrialization process of HKND’s canal and all of the subprojects pose a very serious threat not only to Lake Nicaragua and the Atlantic Autonomous Regions, but also to the rivers to be used for transit or to be dammed to raise and maintain the level of the lake; to the Island of Ometepe, declared a World Biosphere Reserve by UNESCO; and of course, to the MesoAmerican Biological Corridor, which incorporates the Bosawas Biosphere Reserve, the Indio Maíz Biological Reserve, and the Cerro Silva Nature Reserve.

Migration routes for animals through this corridor would be truncated. Forests would be cut to make way for the rail line, the canal, the oil pipeline. Wetlands would most likely be drained or filled for the international airports and the planned industrial zones.

The concession allows HKND to make use of any natural resources and to declare any national territory to be necessary for the purpose of the project. This could be interpreted in many ways, to Nicaragua’s detriment.

How specifically could indigenous peoples be impacted?

Many of the communities in Nicaragua’s Southern Atlantic Autonomous Region are indigenous and have histories dating back to well before the Spanish conquest. While the process of land registration is not fully up to date, the Nicaraguan Constitution of 1987 states that this land is autonomous and belongs to the resident indigenous communities.

The new constitution, amended in December of last year to accommodate the concession of the canal, along with [the new] Canal Law 840, grants HKND the right to expropriate land and natural resources as it sees fit for the success of the project and subprojects. Those who suddenly find themselves landless will be reimbursed for their ancestral lands based on the assessment of the lands’ value for tax purposes, as of June 2013. These individuals can register a complaint about the amount of compensation being offered to them, but they cannot register complaints about the land being taken from them.

Since the law clearly states how much they will be reimbursed for the seizure of their ancestral lands, there is little hope for success in lodging any complaints. And lodging complaints, moving, and purchasing new land requires resources that most of these communities lack.

It is also important to note that recent discoveries of ancient remains in the Angi shell mound in the area of Monkey Point on the Caribbean coast are thought to reveal the oldest human remains to be found in Central America, dating back possibly 4,000 years or more. Carbon dating being conducted on the remains will soon determine if this is true.

How will the construction of a deep-water port next door affect future discoveries?

How serious are the threats to Lake Nicaragua itself?

The threats to Lake Nicaragua, the largest freshwater lake in the region, and its two-peaked volcanic island of Ometepe are quite serious. The lake is too shallow for the draught of the ships anticipated for this megacanal. Dredging will be compulsory and, in all likelihood, dams on the river that drains from the lake to the Caribbean Sea will also be needed.

The lake is well above sea level, necessitating the construction of locks on both sides of the lake. Pollution in lock zones from seawater, diesel, and other waste products from the industrialization of the zones is well documented elsewhere and will have a negative impact on the lake, at a time when freshwater is becoming scarcer, the climate is warming, and Nicaragua’s population is growing.

There are native fish populations in the lake that are fragile and already under threat from invasive species. Even with new technologies for the cleansing and sterilization of bilge water, there remains the threat of introduction of new species and pathogens from bilge discharge.

And perhaps most alarmingly, the most likely route across the lake has been shown to skirt just offshore of Ometepe Island, a small gem of pristine forests, volcanoes, archeological remains from distant ancestors, unique biodiversity, and newly awakening ecotourism possibilities. It is difficult to reconcile the passage of 400,000-ton oceangoing cargo ships just offshore of this UNESCO reserve.

Are there ways the canal could bring benefits?

According to some government advisers, the canal has the potential to increase Nicaragua’s annual growth from 4.5 percent to as much as 15 percent in 2016, and then back down to 8 percent per year. These are certainly heady figures for a developing nation. And according to the concession agreement, in 50 years, Nicaragua will own 51 percent of the shares in the enterprise. If HKND continues the concession for another 50 years, then Nicaragua will own all of the shares after a total of 100 years.

We are also being told that there will be a substantial increase in the level of employment, and some universities are beginning to offer courses related to the shipping and canal industry. If the increase in full-time and well-compensated employment is indeed substantial, then this too would be beneficial, although there are no guarantees that this will occur. As stipulated in the concession, the preference for new hires for the canal project will be Nicaraguans first, the region second, and Chinese nationals third.

The kinds of jobs for which local populations will be hired remains to be seen. Nicaraguan government websites along with HKND’s website list other benefits envisioned as a result of the building and operation of the canal.

The Nicaraguan Academy of Sciences (of which you are president) is coordinating efforts with the InterAmerican Network of Academies of Sciences to carry out an independent impact assessment. What do you hope to accomplish with that?

There is no way of knowing if any research carried out by the global scientific community might have an impact on the construction of the HKND canal or to even halt construction. It seems most unlikely that the project would be halted.

However, we would hope that our combined expertise, research, and genuine concern for the protection and best sustainable use of the region’s environment and natural resources would be considered by the Nicaraguan government, by HKND, and by the designers of the canal and its subprojects in order to determine the least destructive route and least harmful impact on such a fragile and necessary ecosystem as is found in Nicaragua.

What do you hope the international community will do?

We are asking the international community to join us in providing funding for and conducting research into all possible impacts—negative and positive—of the construction of HKND’s canal and subprojects and to share this information with the Nicaraguan government, peoples, and world community. We see an urgent need for independent environmental and social impact studies, completely indifferent to the potential long-term financial success of the canal project.

This interview has been edited and condensed.